Every complete back workout routine should consist out of horizontal and vertical pulling movements. Rows are the best way to get your horizontal pulling in. And you can do them very effectively by using resistance bands. Your back is one of the most important muscle groups to look great and have an amazing performance in your fitness activities. That’s where the row comes into play. This exercise will make sure that you build strength, muscle and tone your back. This article will have a closer look on how to perform seated rows with resistance bands.

To really get the most out of working out with resistance bands, it’s a really good idea to get a set of bands with different resistance levels from the beginning. This way you will be able to really adjust the resistance, and you will also have the right band for all the other exercises besides rows. If you’re looking for a good set, check out the one right here: Resistance Bands Set

We start by learning the correct way to do seated rows, followed by the most important Dos and Don’ts. To get your imagination going, we will show you some alternative variations to the standard execution of the movement and give you great tips to increase and lower the resistance with easy changes. The last section is all about details regarding effectivity of resistance bands when it comes to back training, what muscles are used in rows and how to actually incorporate this exercise into a workout program effectively.

How To Do Seated Rows The Right Way With Resistance Bands?

The very first step to safe rows and a perfect warm, is a good warm up. Do yourself a favor and don’t skip it this time. Doing a short and simply workout will reduce the risk of injury drastically, and it will also improve your performance in the workout.

Besides a resistance band and your body, you won’t be needing anything else to perform seated rows. However, we highly recommend using gloves to get a barrier between your hands and the resistance band. Whenever a band is stretched, it generates friction with any contact point. Workout gloves like these – Click – will protect your hands against that friction.

Follow these 6 steps to perform a perfect seated row:

When you pull the band you want to focus on pulling your elbows back instead of bringing the band towards you, this will help a lot not to involve a lot of your bicep during the movement.

⓵ Shoulders back and chest out – quite common with rows is internally rotated shoulders. Basically, your shoulders are pointing forwards. This position is a very weak position and puts stress in places where it should not be, like your neck and rotator cuffs. This can even result in unnecessary injuries which are totally avoidable. Bring your shoulders back and down, and fix them in this position. Also stick your chest out, this will bring your shoulder blades together. 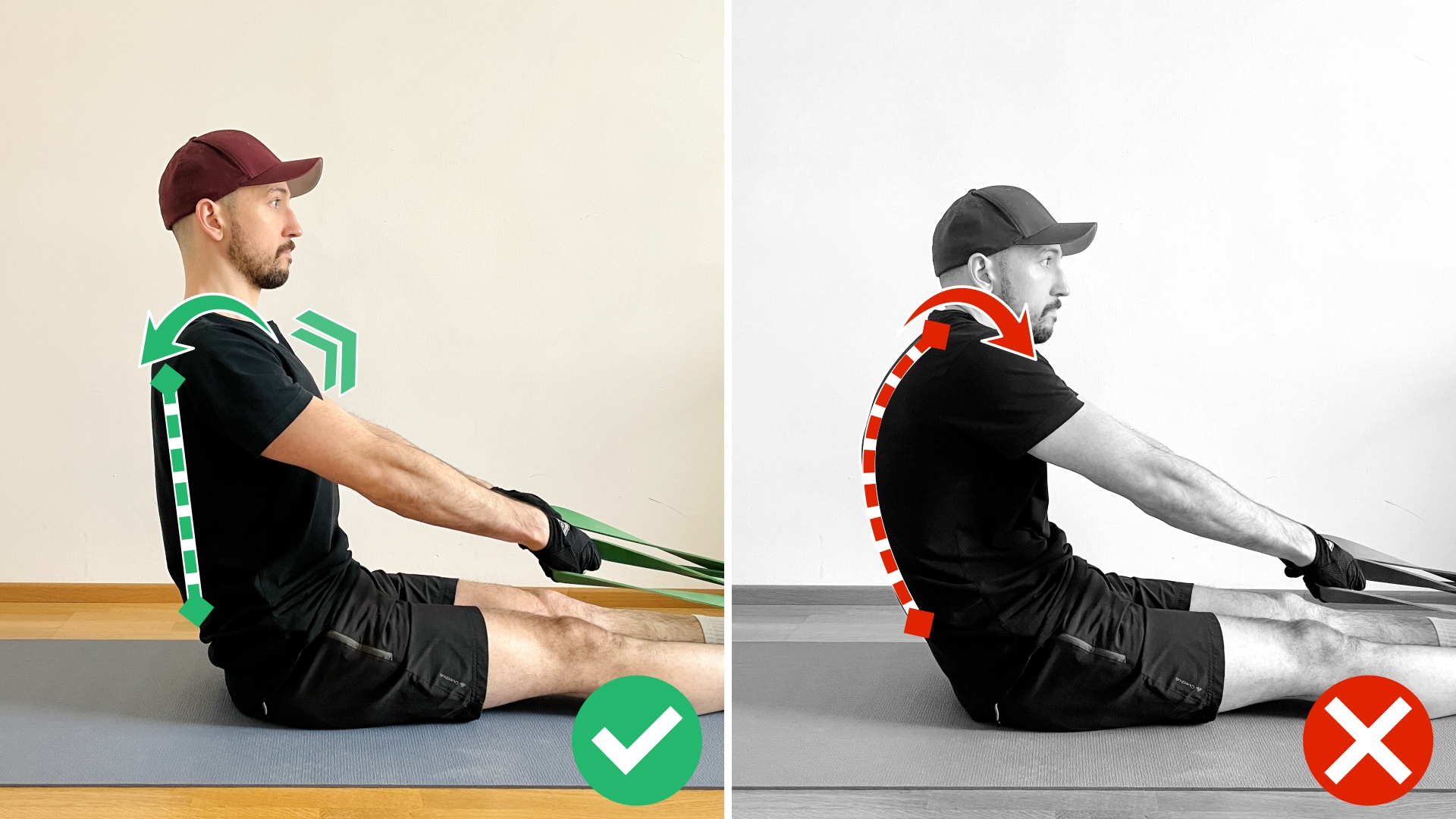 The same applies for the end position of the positive movement of the row. 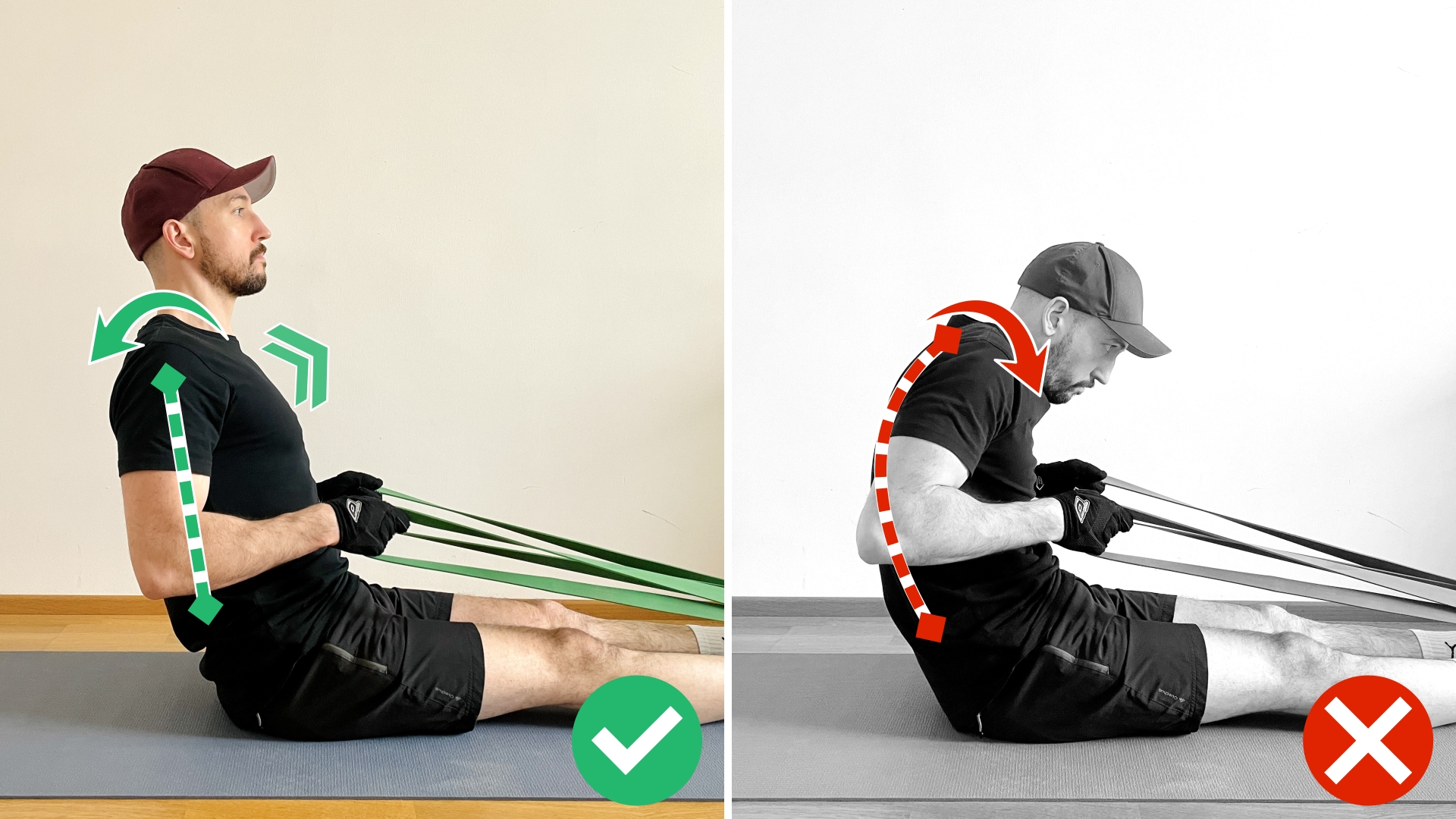 ⓶ Avoid upper body forth and back movement – with rowing, especially when using a heavier band with more resistance than they can handle, people tend to start moving forth and back quite much with the upper body to gain momentum. This is a mistake that will cause you to make this exercise less effective, so try to keep your upper body as straight and locked in place as possible while pulling your elbows back as much as possible. A little movement is ok and is actually good to stretch your lats in the eccentric part of the exercise. 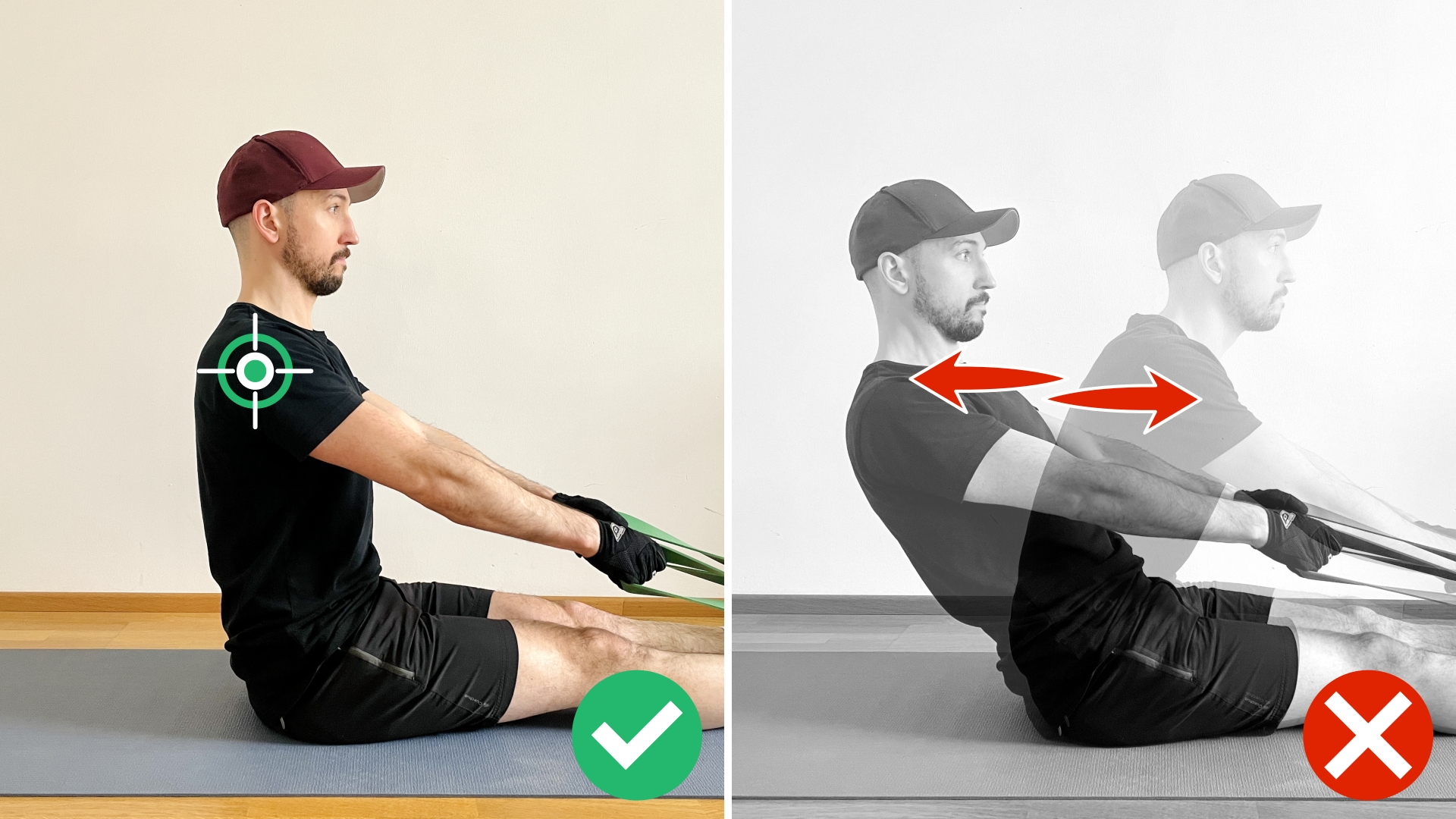 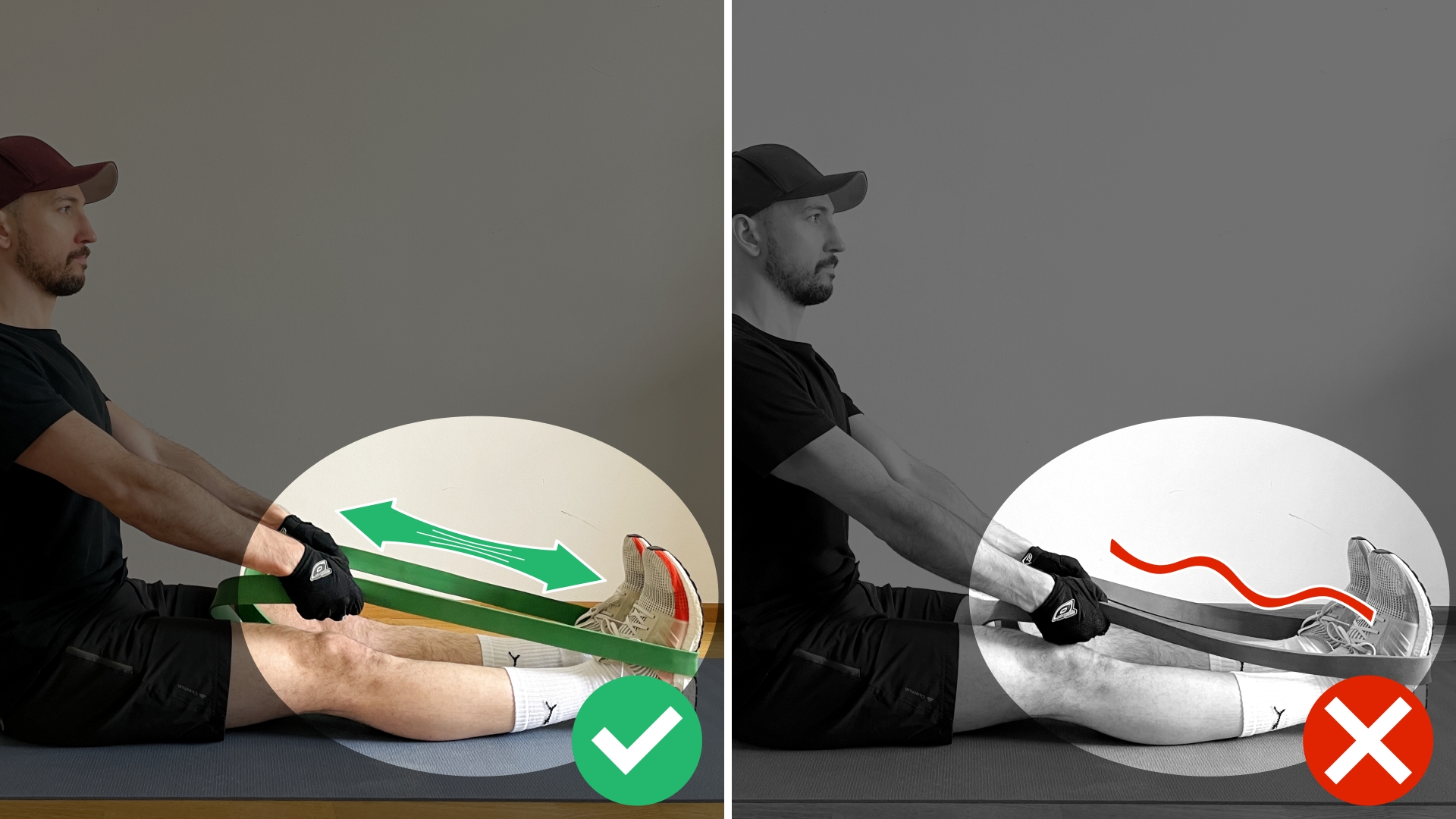 ⓸ Controlled reps and full range of motion – controlling the movement and being controlled by the band is always a good idea. This will actually make your muscles work more and makes the exercise more effective. Especially the negative part of the row – where you bring your hands towards your feet – is where your back has to work very hard.
Also, always aim for a full range of motion. This means starting with fully extended arms and moving the elbows back until they are behind your upper body (from a side view). 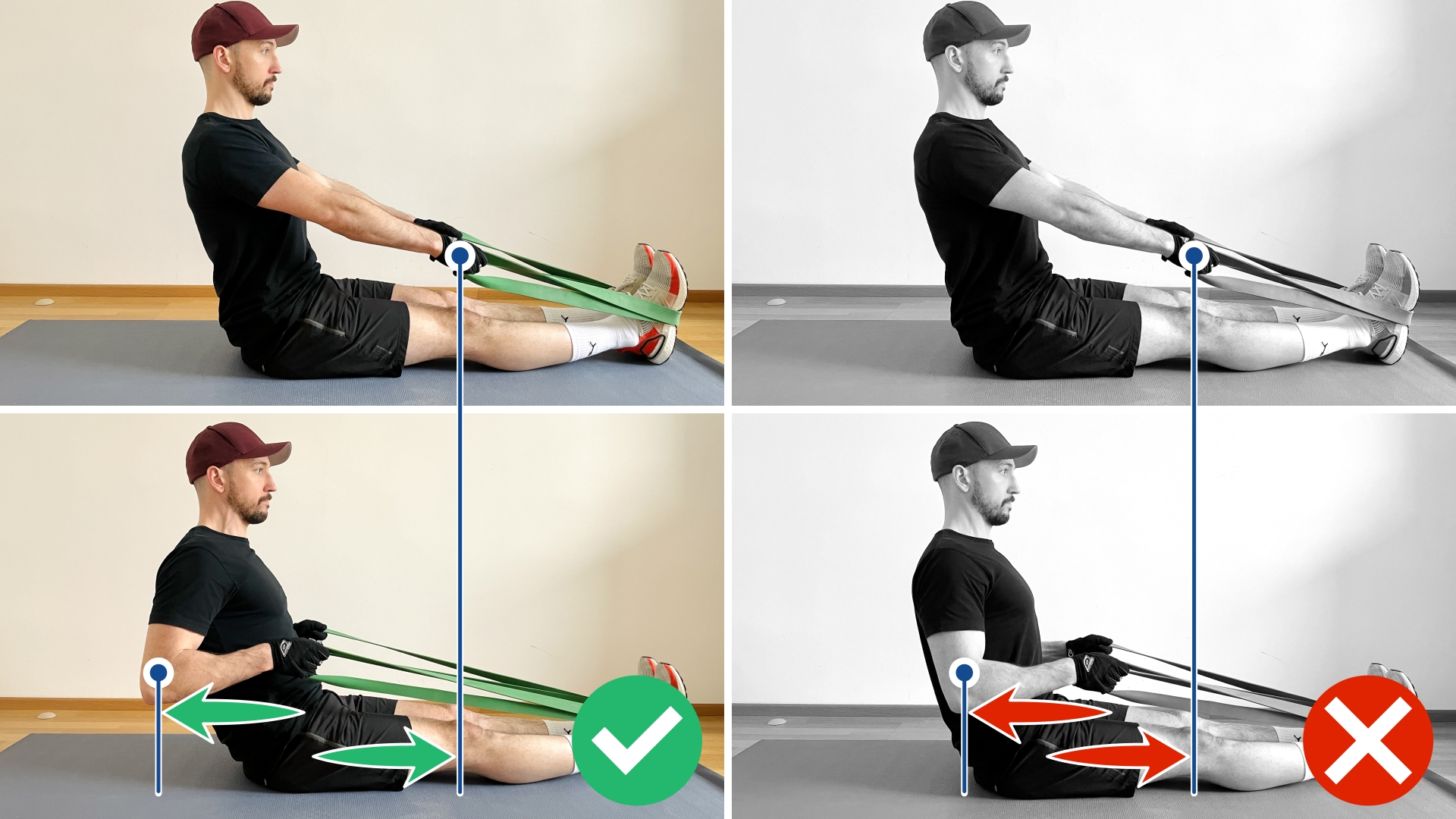 How To Adjust The Resistance

One of the biggest advantages resistance bands have over weight is the option of adjusting the resistance of a single band. Bands have the characteristic that the further you stretch them, the more resistance they will generate. It is a good idea to use the full potential of one band before switching to the next heavier one.

The best methods to do that for seated rows are:

Single band vs. double band – So far, you’ve seen the version where you double the band and use each end as a handle. Of course, you can do seated rows by only using a single string setup. This will reduce the resistance quite drastically, but it gives you the option to adjust the resistance to your current level. 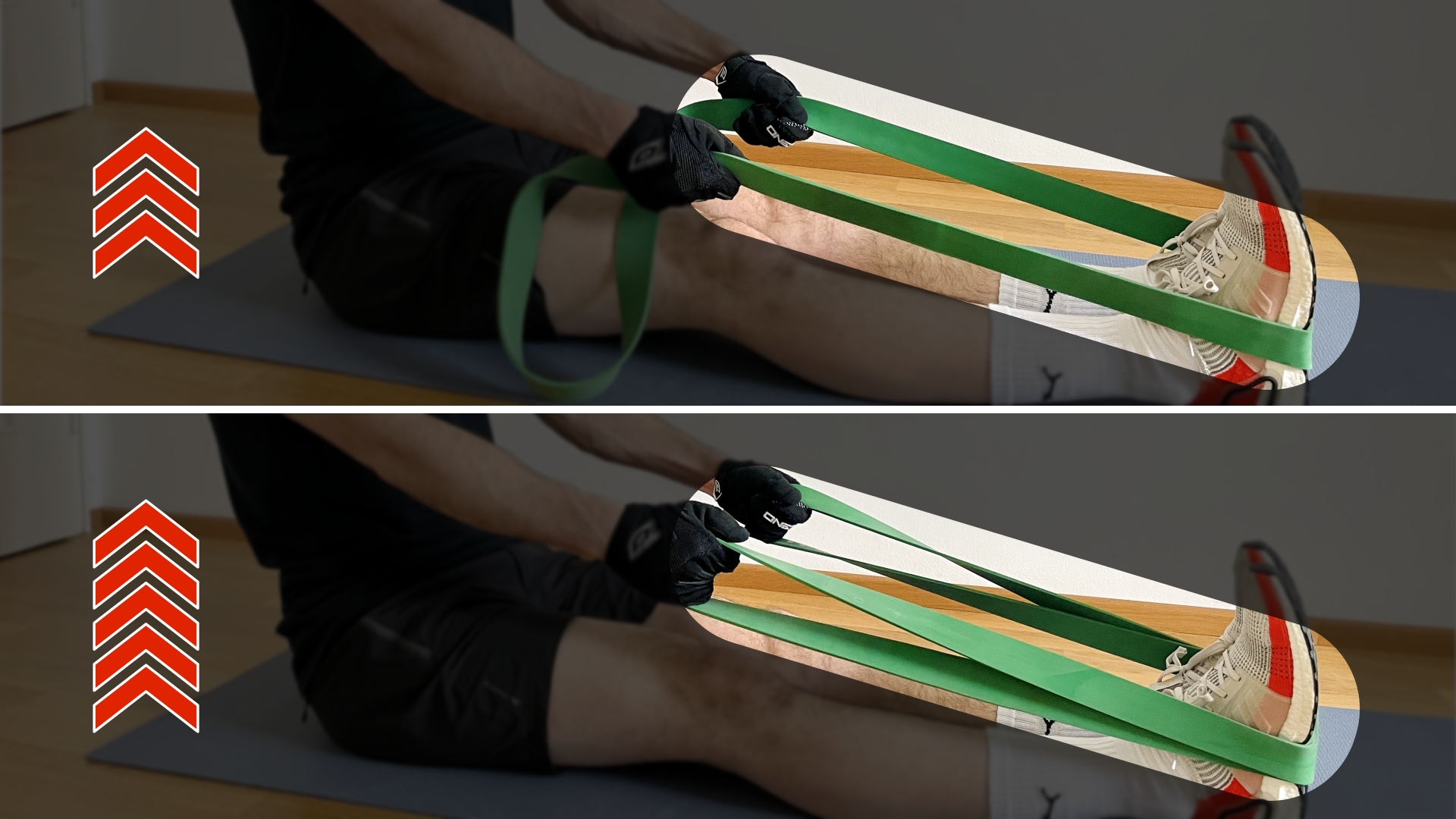 Shorten The Band – Another method is simply shortening the band. This will make the effective length of the band shorter, therefore you will have more resistance in the beginning and the end of the movement. This way you can add only a little more resistance without going overboard and compromise execution form. A great way for seated rows is to simply grab the band inside the loop. This will shorten the band and also give you a more stable grip. 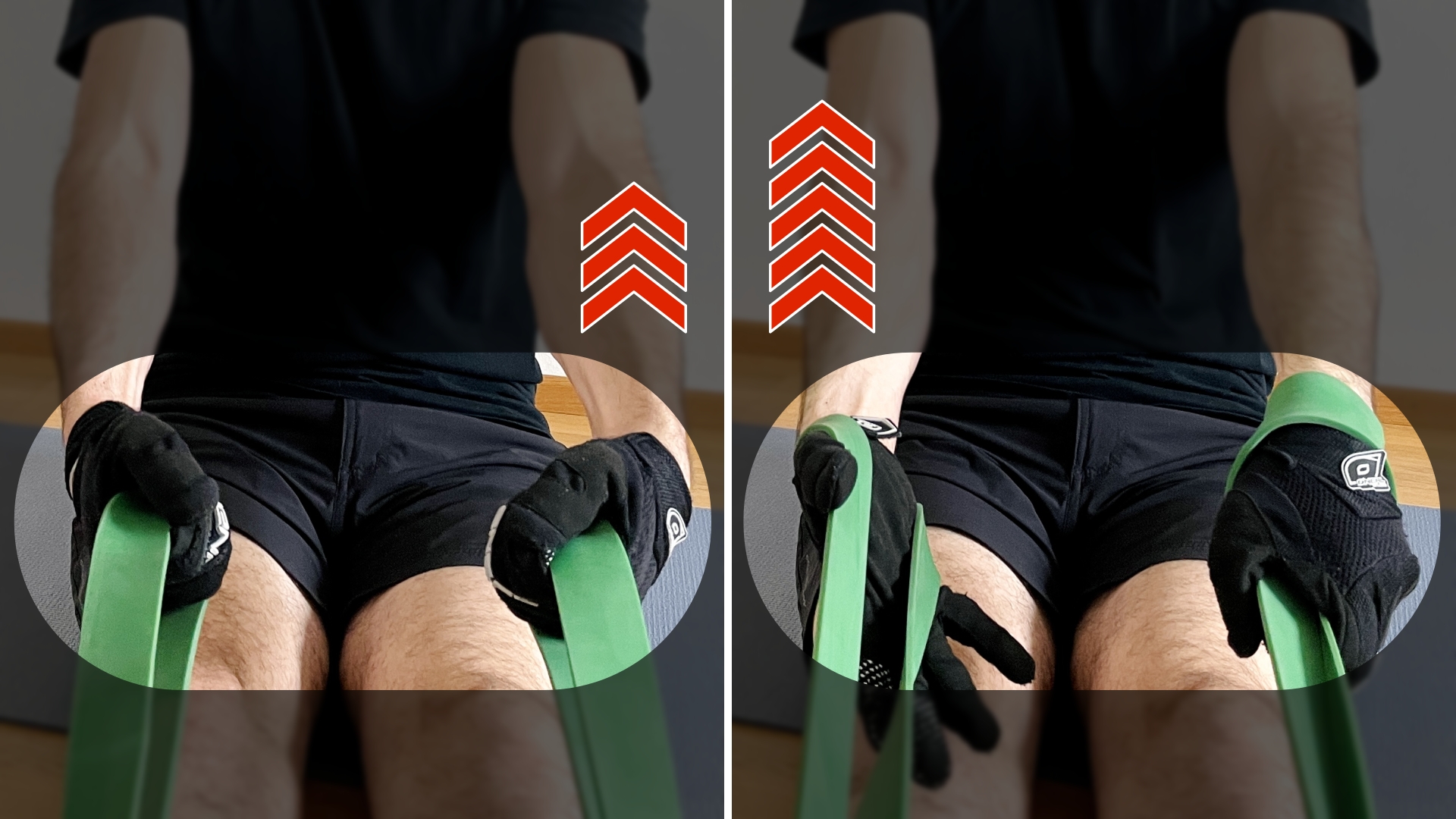 Use A Door Anchor – you can adjust the resistance simply by increasing the distance to the anchor point. Hopefully you can’t just make your legs longer, but you can use a door anchor. Attach the band to it and sit down on the floor with some distance to the anchor point. This setup is great because you can really fine-tune the resistance level by changing the distance, and also it is more comfortable on your feet. If you don’t have an anchor yet, get one a quick as possible – it will open tons of exercises and variations: Door Anchor 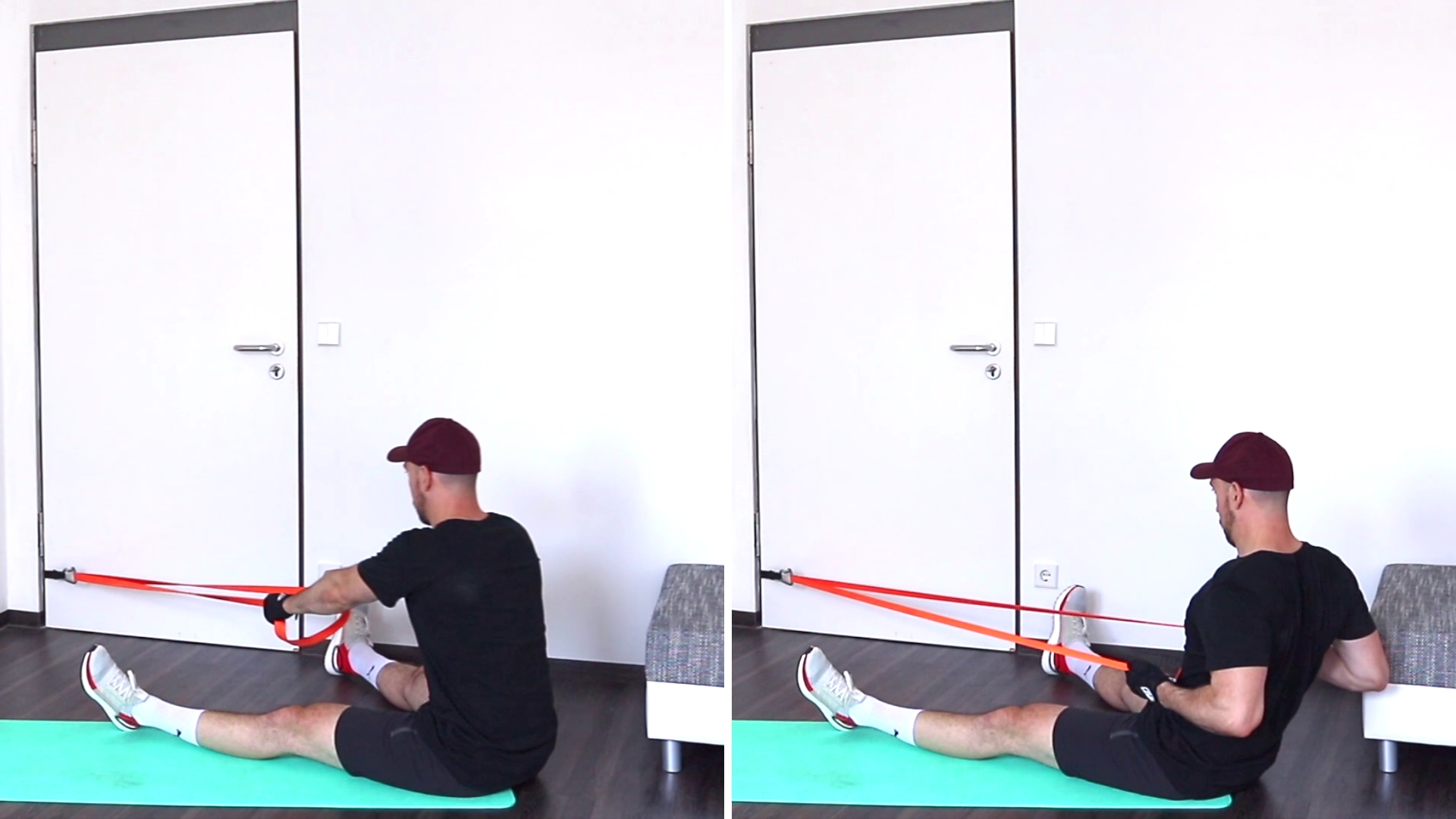 Double Time – If you feel that there is only a tiny bit of resistance missing and a jump to the next thicker band would be too much, simply add a lighter band as a second. It will give just that extra resistance you’re looking for without taking it over the top.

Exercise Speed – changing the speed of reps is often an overlooked or forgotten method to increase the intensity. The resistance stays the same, but by performing the movement slower, you make the row a lot more challenging.
Another way is keeping the exercise speed and the resistance the same, but adding a pause or isometric hold in the fully contracted position (elbows behind your body).

My favorite way to incorporate this is by doing alternating seated rows and while one arm performs the row movement the other one waits in an isometric hold. The following how-to video shows what I mean exactly. 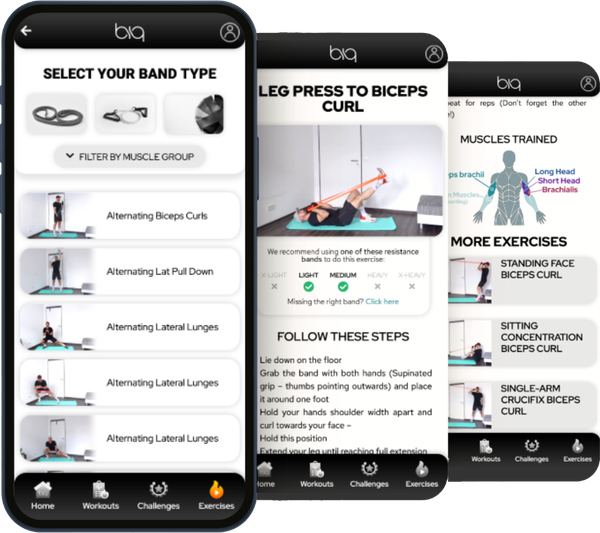 Alternative Ways To Do Seated Rows With Resistance Bands

There are quite a number of different ways of how you can change this exercise. Incorporating variations of an exercise into your workouts is always a great idea. This way it doesn’t get boring, and you challenge your body and muscles with something new.

You will always hit every muscle in your back when performing a row, but you can set a focus on specific muscles by changing the exercise form. Depending on the elbow position or rather the point where you pull towards, you can put and emphasis on the lats or the traps (and some rhomboids). 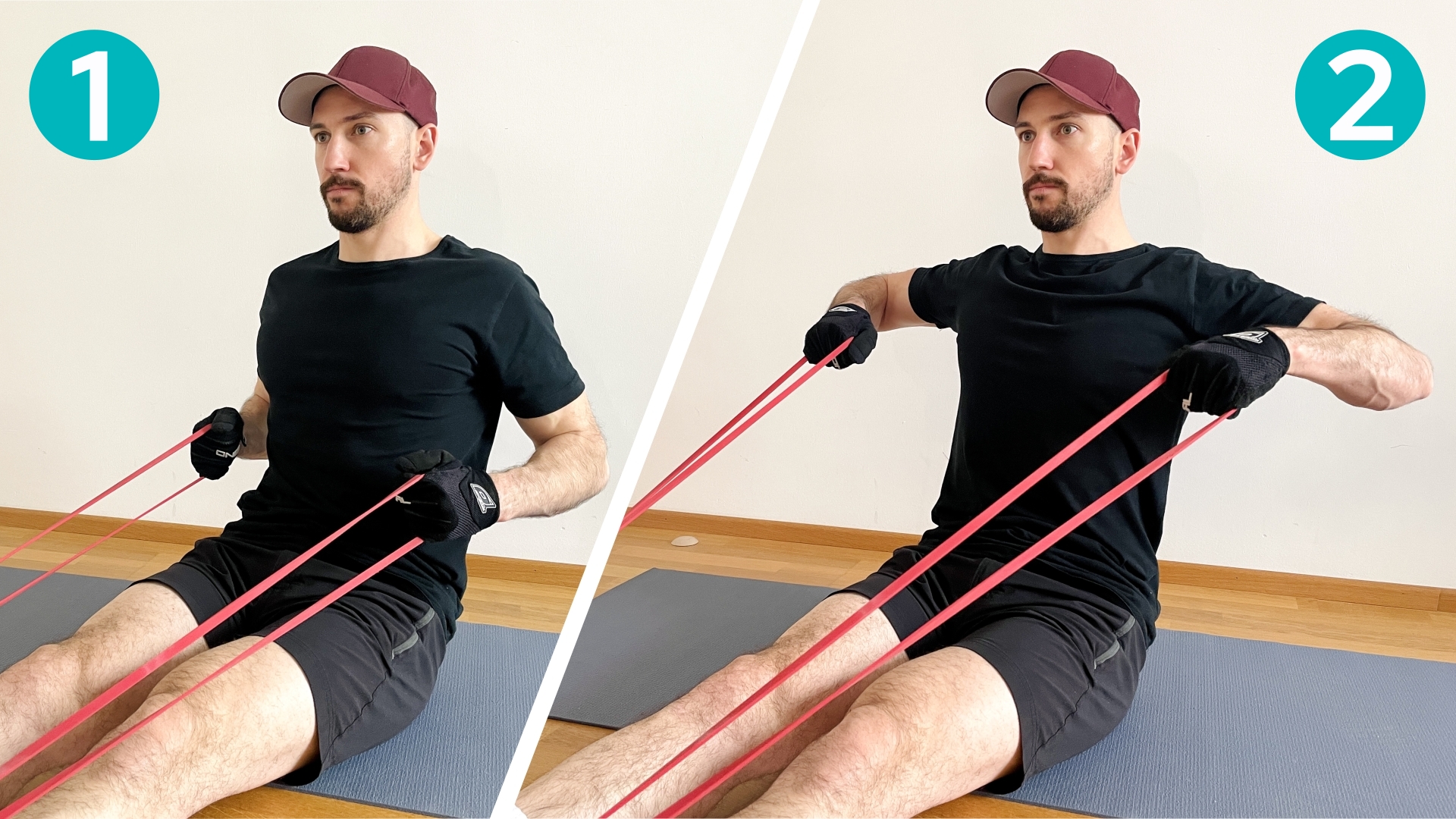 There are basically 3 different grip variations when it comes to seated row. By changing the hand orientation, you can slightly adjust to what level the involved muscles are stimulated. 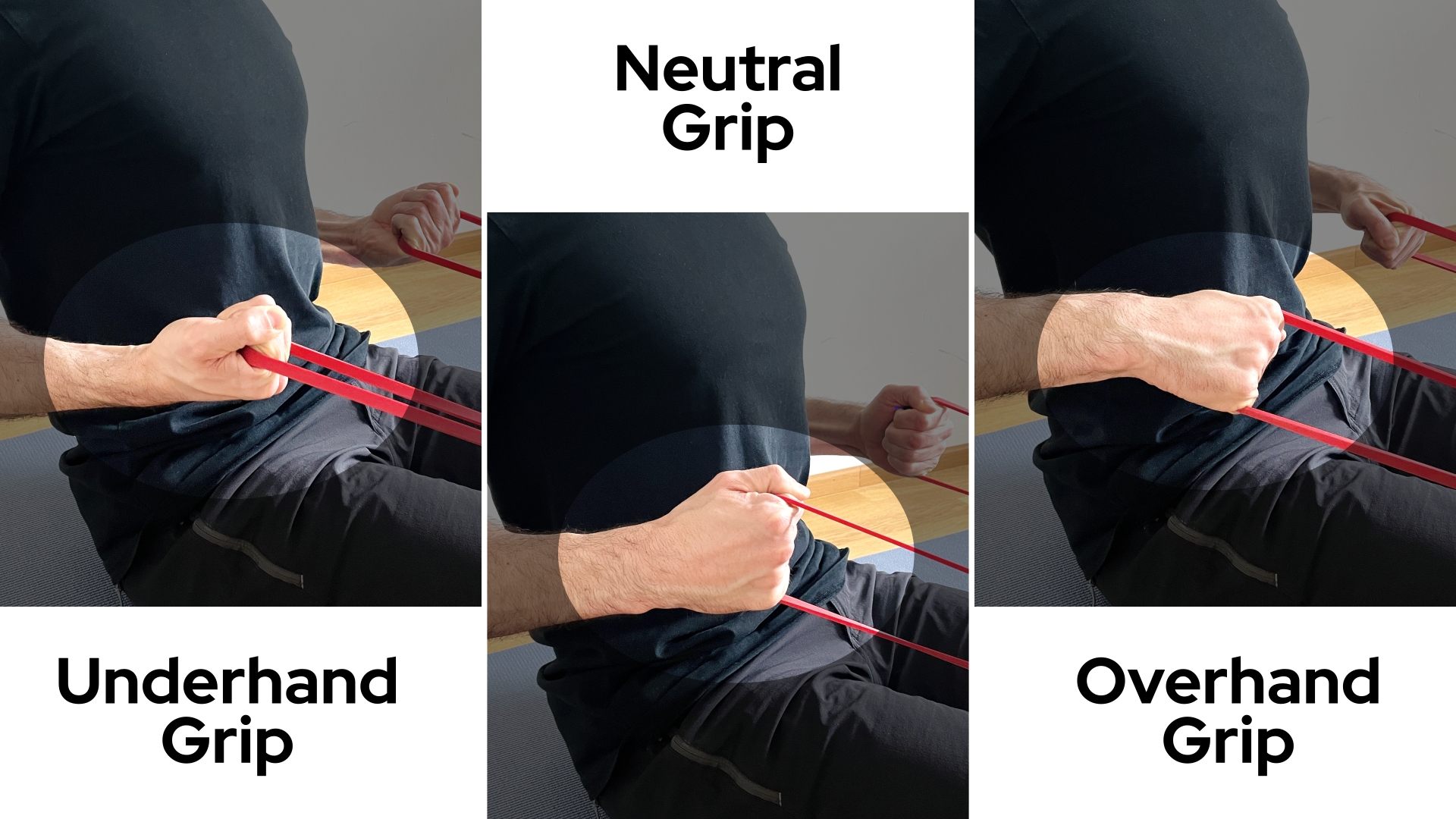 Bent Over Rows – The bent over row is a more challenging version of the seated row. Your core and your lower body have to do quite some work to stabilizes your body throughout the movement. Especially, the lower back plays quite a big supporting role in this variation. To really fin out what to keep in mind in this row variation, check out the full article: Bent Over Rows With Resistance Bands 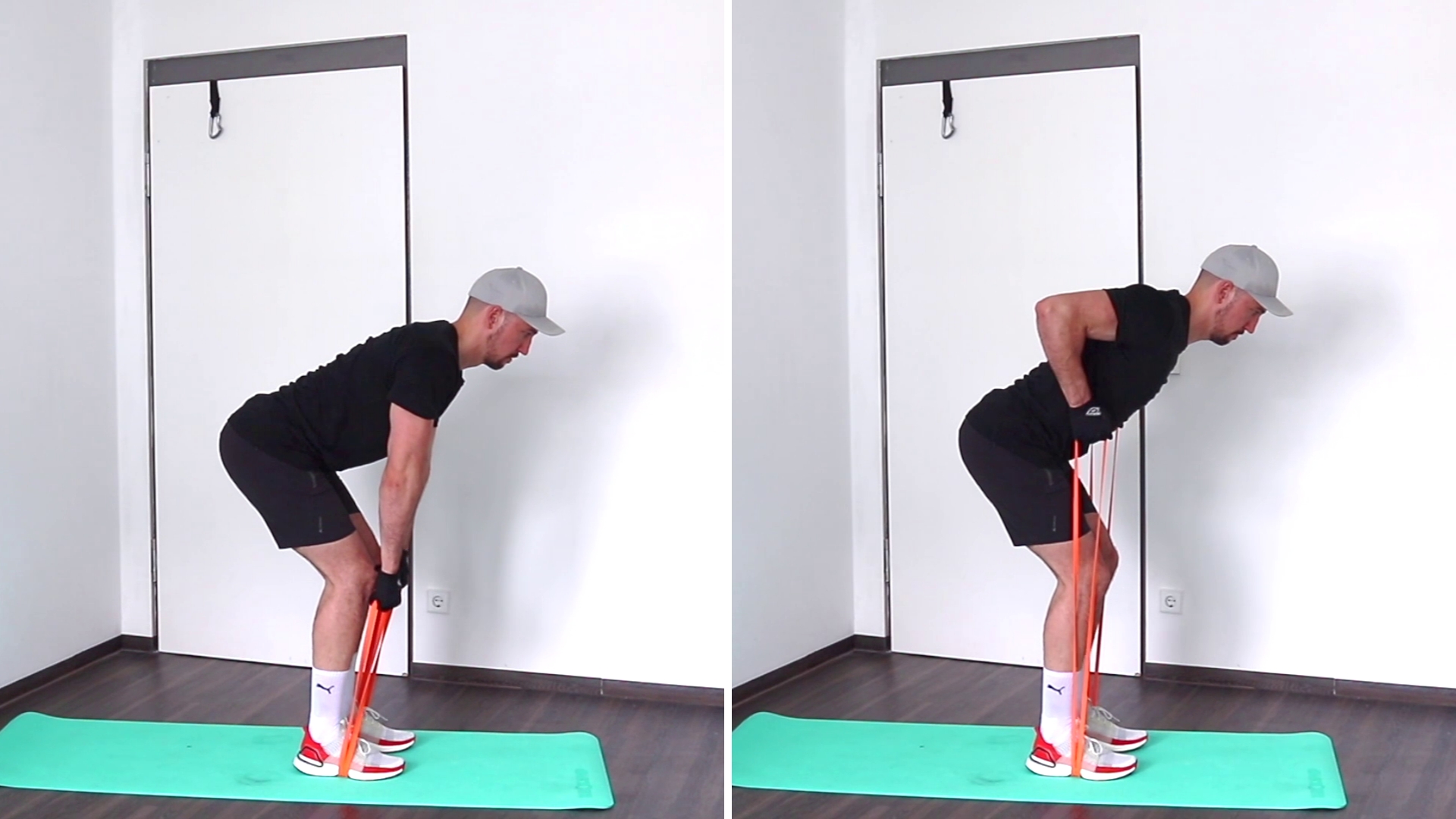 Standing Rows – Doing rows, standing up, is a very functional way of training your back. You won’t be in a sitting position while pulling something in your every day life too often. But pulling and pushing standing up are quite common movements we do throughout the day. A huge advantage of this variation is the option of adjusting the resistance by simply taking a step backwards – to increase the resistance – or forwards – to lower the resistance.
Find out more in the full article: Standing Rows With Resistance Bands 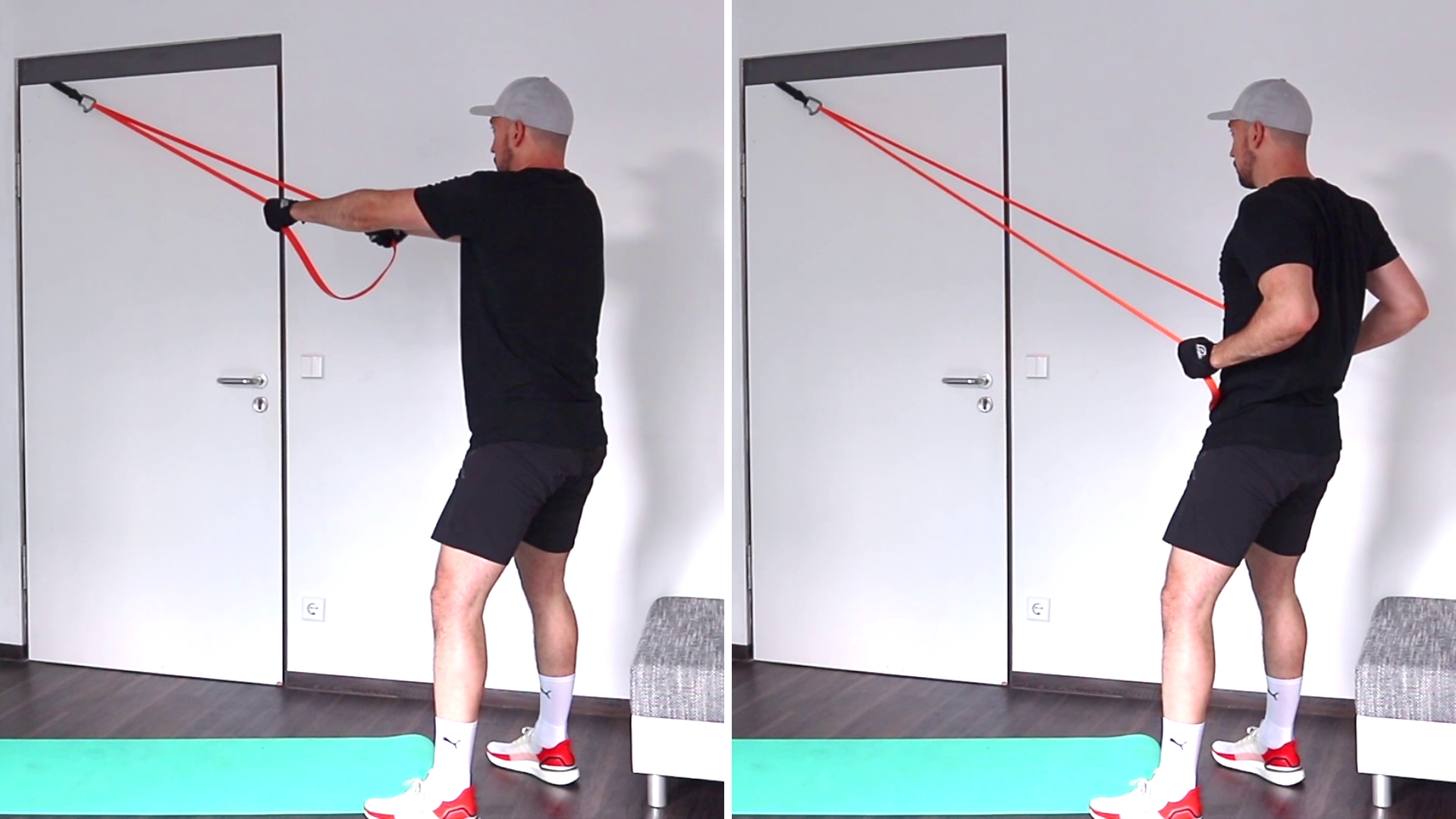 Can You Train Your Back Effectively With Resistance Bands?

People who tell you that resistance bands are a waste of time probably never tried working out with them and never gave them a chance. Times when bands were only used for warming up, mobility work and injury recovery are long gone. Nowadays, the resistance generated by bands is more than enough to stimulate muscle growth and increase strength. There are even some advantages resistance bands have over other ways of resistance training, like using weights and machines.

So the short answer would be: Absolutely Yes! – Just give it a go and see for yourself.

Why Does Training With Resistance Bands Work

A really short and dirty explanation is: Resistance is resistance – your muscles don’t know where it comes from.
This means muscle simply respond to loaded movements by getting stronger, more efficient and bigger. How this load is generated is completely non-relevant to them. Lifting weights or moving resistance bands will stimulate your muscles.

To get more in depth information on this topic, check out our full article: Why Does Training With Resistance Bands Work

Benefits Of Training With Resistance Bands

We promised you benefits that resistance bands have over weights and machines:

There are even more benefits training with resistance bands will give you. Check out the full list here: Benefits Of Resistance Band Training

What Muscles Are Used In A Resistance Band Seated Row

Rows will involve all the pulling muscles in your upper body. Especially the lats, the traps and the biceps will be highly active. As we discussed earlier, you can set an emphasis on specific muscles by changing the elbow position while pulling and the way you hold the band with your hands.

Rows are great to build your back and become more functional, also you will definitely improve your posture. But doing rows alone is not the way to go to get a balanced and healthy body. There are all the other muscles we have to take care of. The only way to do that is having and following a well-structured workout program which is tailored to your goals.

Of course, you can do it yourself, but this will take time to research and some trial and error. An alternative would be trying our training app. We set out with the goal to provide information about how to use resistance bands in a way which actually makes sense. No generic half-truths. We believe that working out has to be engaging, functional and challenging. Generic workout programs don’t give you any of that.

The BIQ training App will give you tailored workout programs, single workouts to do whenever, challenges and an exercise library. All that in your pocket, on your mobile, ready whenever you are.