Shrugs are the “hulking” exercise that can build you big traps nad doing them with resistance bands will offer several benefits compared to do them with free weights and an exercise that you should really have in your workout plan.

In the first part of this article, we will show you how to execute shrugs with a resistance band properly and in the second part, you find some really nice alternative ways to do this exercise to either go lighter or harder on it to really work the different muscles in your back the way you need it.

Let’s jump right into how you do the basic shrug with resistance bands.

Doing your shrugs with a resistance band gives you several advantages over doing them with your free weights.

There are also more reasons to favor resistance bands over traditional free weights, like reducing the stress on your joints, getting more peak contraction, and many more. But we’re talking here about doing a standing row, so if you’re interested in background info about what benefits resistance bands give you in strength training and bodybuilding, check it out here.

What You Need To Do This Exercise

Resistance Band With The Right Resistance

Use the right resistance band to get the most out of the exercise. Too heavy bands promote bad form, too light bands leave results on the table. We recommend this one here

Lower friction on your hands, especially your palms with the right workout gloves for resistance band training. We recommend this one here

Get the perfect grip on the bands, just like handles but with more freedom of gripping .We recommend this one here

How To Do Shrugs The Right Way

Your traps are the muscles in the back of your head and the only way to actually target them isolated is by pulling weight straight up – and this is exactly what the shrug movement does.

It’s really important that you have your upper body, your neck, head and also your arm not working in any way while using your traps only to pull the resistance band up.

What you do is you will double the band, step on the band with both your feet next to each other and grab the band in each hand. Now put your head in front a little bit (you don’t want to look like a turtle, just a little) and then use your traps to pull up.

It helps a lot of doing this in front of a mirror to consistently check that neither your arms, head or upper body is working during the shrugs. 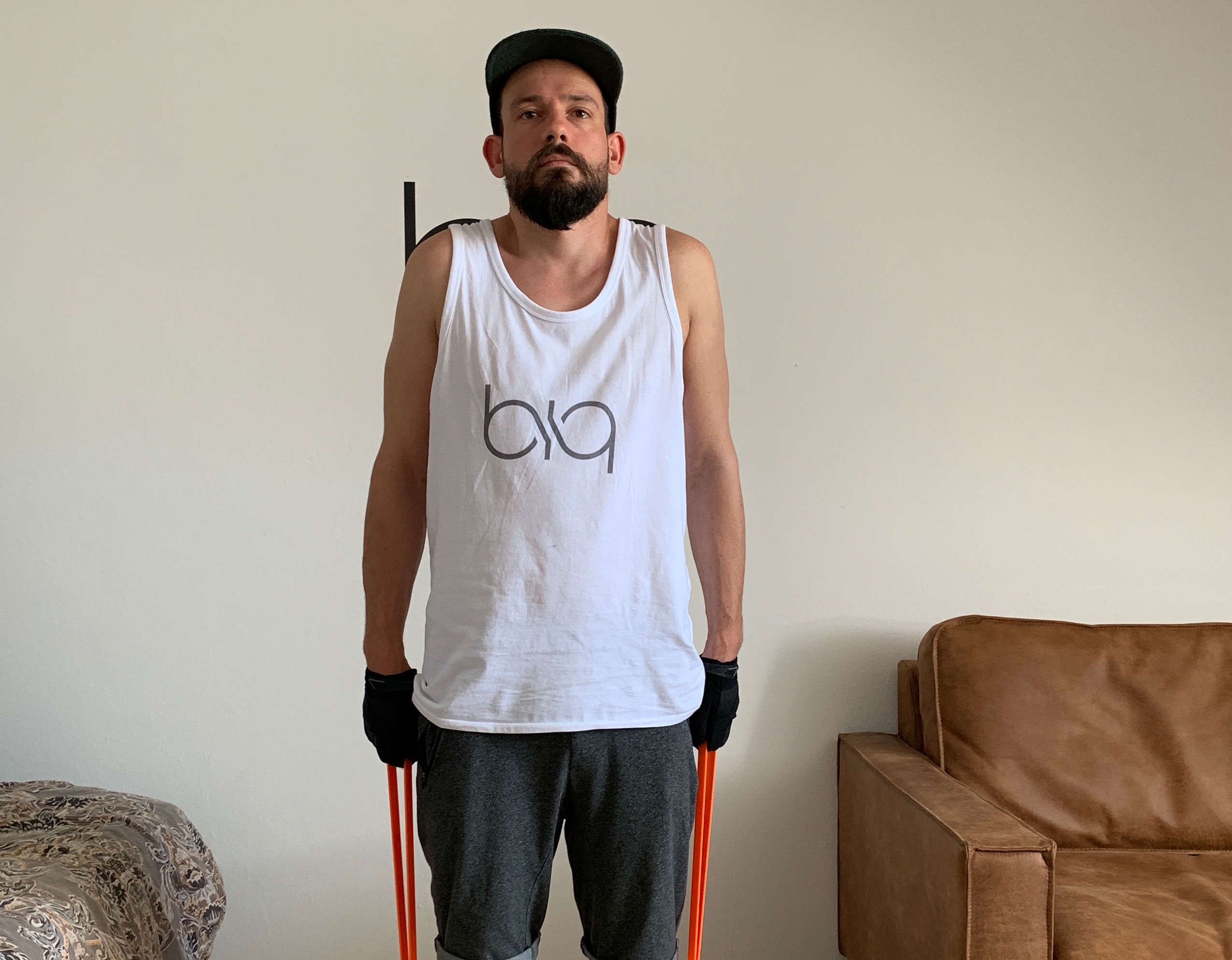 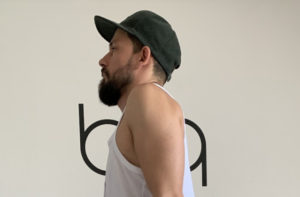 ⓵ No Shoulder Rolling – some people do “roll” their shoulders at the end of the movement. This might feel better but it actually makes you lose a lot of peak contraction and slow down your progress. Shrugs are an isolation exercise so you will target your traps specifically and work them in their own so don’t use any other muscles during this exercise. 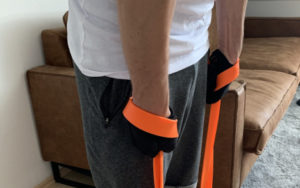 ⓶ Upper Body & Arms Fixed – I think this is the most common mistake and you can see this a lot. There’s no other movement of any kind involved in shrugs so always focus on your army “hanging” down and also don’t move your upper body forward or backward.

Also, your head should be fixed all the time, don’t move it back and forth during the shrugs. 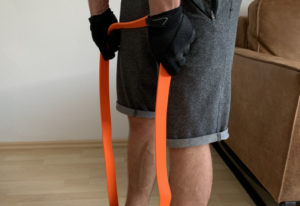 ⓷ No Slack – when you are in the fully extended position you still need to have some resistance of the band pulling and prevent slack.

Slack is giving you a lot less potential to really work your muscles and if you can’t do shrugs without having slack in the band, you need to take a lighter band and stretch the band more to get the best resistance that’s working for you.

Alternative Ways To Do Shrugs With Resistance Bands

With every version of an exercise, you will find people that really like it and others that don’t like it that much. If you have problems with the traditional way of doing shrugs as shown above (while executing it the right way), you might want to try one of the alternative ways. 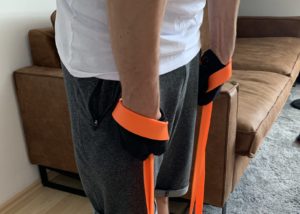 Grip Position – especially with loop style bands and heavy resistance you might have problems trapping the band without a bad feeling in your hands. (I always recommend using gloves to workout with resistance bands!). Instead of simply gabbing them like handles, you can get your wrists through and then grab them a little easier. This will also increase the resistance since you shorten the band that way.

Bend Over Shrugs – The traditional shrug works more on the upper part of your traps, but you can also give the lower traps a little more attention by leaning forward slightly. 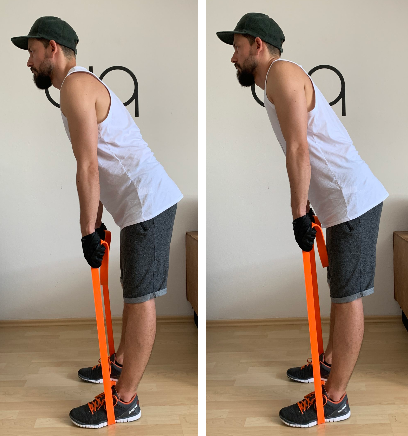 If you don’t want to isolate the upper traps this can be an alternative for you.

Palms Together Front Shrugs – This here is another alternative that I really like doing, called palms together front shrugs. You will turn your hands to the outside and put the back of your hands together.

Now you do pull your shoulders up using your traps and always keep your hands touching each other. 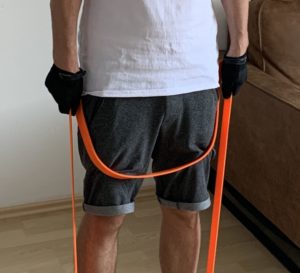 As you normally stand on the doubled up resistance band you will get to the point where you find it harder to load more resistance as you can only do that by moving your legs to a wider stance and this can give you a limit at some point.

You can switch it up by only grabbing one layer of band at once and then you can adjust the resistance by grabbing further down or up to get exactly the resistance you need.
A different way of adjusting the resistance is by wrapping the band around one or both feet to shorten the band.