You want healthy shoulders? Train them. Shoulder problems are quite common. People prone to train bigger muscle groups like chest, back and legs and think that other muscles will take care of themselves. I myself had a shoulder injury 10 years ago because I neglected training them. Since then, it was a long journey but I am finally pain-free. Especially resistance bands helped me to achieve that. Since then, bands are my go-to tool for training shoulders and I will explain to you why.

In this article we will cover how to perform a perfect shoulder press (also known as overhead press) with bands, as well as what other variations you can incorporate in your training. We will also cover how you can progress by adding more resistance and multiple tips we came up with by training with resistance band for years.

We start by showing you the right way of doing shoulder presses. In the second part of the article we then cover variations and great tips to help you maximize your performance and get a great workout.

Then here we go, let’s get your shoulder press game to the next level!

Doing your shoulder press with a resistance band gives you several advantages over doing them with a free weights.

There are also more reasons to favor resistance bands over traditional free weights or machines, like reducing the stress on your joints, getting more peak contraction, and many more. But we’re talking here about doing shoulder presses, so if you’re interested in background info about what benefits resistance bands give you in strength training and muscle building, check it out here.

How To Shoulder Press The Right Way

The best way to get into the starting position is to step on the band first, then squat down a little and get the elbows inside the loop. Then you squat up again you’re in the starting position without fiddling and risking injury.
So we are in the starting position now. Before you start pressing I want you to actively flex your butt, take a breath and engage your abs. This will get your body ready to press the load in the most effective way. These steps basically make your body more rigid and therefore give you more stability to perform the lift.
Now comes the actual shoulder press. Keep your hands slightly in front of you and without leaning backwards drive your hands over your head until you lock your elbows.

You might notice that your head is in the way, and you are right. If you’re using bands with handles, you won’t have this problem, but with loop bands you will have a string of band in front of your body. To conquer that challenge you need to move your head, not your whole upper body, a bit back just for the moment the band passes your head. Straight after you want to push your head back in between your arms. This will give you the best stability for the exercise and the perfect form for the shoulder press.

Hold the position at the top with extended elbows for a second. Then return to the starting position by bending your elbows lowering your arms slowly.

That’s basically the shoulder press folks. Not too complicated in theory, but it takes quite some time to perfect the form. There are actually many tweaks to this exercise that I have listed below so make sure to check them out

⓵ Leaning Backwards – this is the most-common mistake with this exercise and even might hurt your lower back and shoulders if you do it with high resistance. Make sure not to lean backward while performing the exercise. Flexing your butt and engaging your abs will prevent your body to compensate by going backwards. 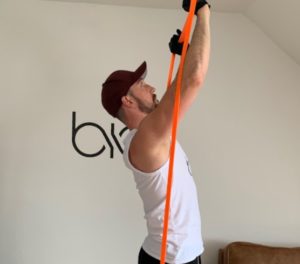 If you have problems doing shoulder presses as shown above, please check below some alternative ways that will help you find the perfect shoulder press variation with resistance bands for you.

⓶ No Slack – this won’t be a problem with the standing shoulder press, but we will show you other variations as well. Make sure that the band is already stretched in the starting position and doesn’t have any slack. This will ensure that the shoulders are working throughout the movement.

With every version of an exercise, you will find people that really like it and others that don’t like it that much. If you have problems with the standing version of doing shoulder presses as shown above (while executing it the right way), you might want to try one of the following variations.

Single Leg Shoulder Press – In this variation you will be in a split stance and stand on the band with only one foot. You can either have the band in front of you (front foot) or behind you (back foot). With the band behind you, your front delt will be involved much more in the movement. This variation will also prevent you from leaning backwards. 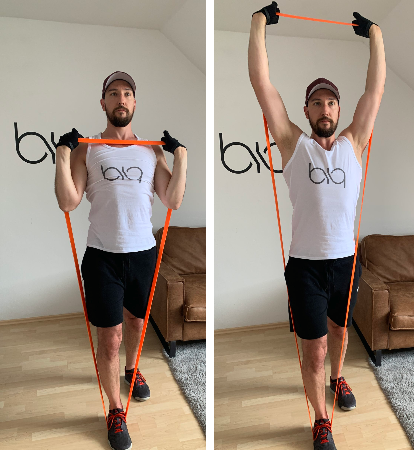 Seated Overhead Press – The seated version is great for building a better mind muscle connection with the shoulder muscles. Since you don’t have to focus on the little details in the form anymore, you can put your whole concentration into pumping those shoulders. You can either sit on the band or place it underneath your feet. These two ways are also great to adjust the resistance. I would highly recommend not to lean against anything while performing the exercise. The exercise will be a bigger challenge in this way and you will also work on your stabilizing muscles. 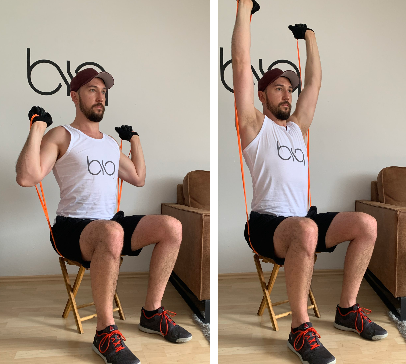 Push Press – This variation is great to incorporate some cardio in your workout and overload the shoulders, since you will be able to handle more weight. From the starting position with straight legs and your arms in the bottom position, you will go into a partial squat. Now you will explode upwards, by engaging your lower body and press your arms over head at the same time. The leg drive will provide you with more force to get the band over your head. 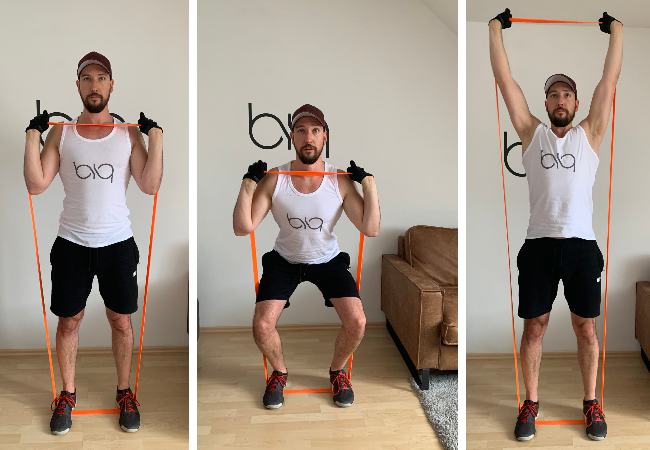 Squat Press – Combining legs and shoulders is the goal of this variation. And this goal is fulfilled fully! This actually simulates a lift in the weightlifting field. The Clean. You basically perform a front squat and add a shoulder press at the end of the squat. The shoulder press part is performed as describes above.

Uni Lateral Shoulder Press – This variation is perfect to work on any imbalances you might have between your right and left side. As well as getting a great mind muscle connection and feel the burn in your shoulders. Step inside the loop with one foot and press with the arm on the same side the band over head. You can also do this in a sitting position. 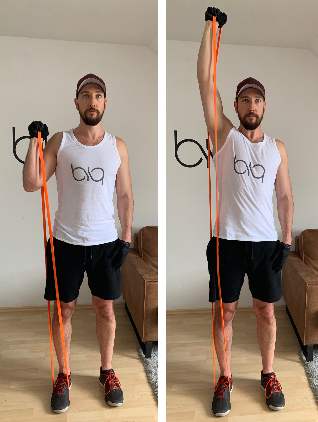 If that doesn’t get you that pump, here are some tips that will help you work those shoulders to the ground.

Shorten The Band – many people make the mistake to use a band with a resistance level that’s simply too high for the exercise. The full effect of bands results from getting the right resistance and if you use a band that’s too heavy you can’t get a clean range-of-motion and clean reps and get lower progress.

Instead of taking a stronger band simply shorten the band, you use and you can do that perfectly by wrapping it around your hand once or twice and get the extra resistance without losing the ability to do clean reps.

That’s also one reason why I don’t like the resistance bands with handles attached to it and prefer the loop-style bands.

Foot Position – Just widen your feet to pre-stretch the band and start with a higher resistance. A good band will be able to handle the stretch easily, so you shouldn’t worry about it tearing.

Double Time – If you feel that there is only a little bit of resistance missing and a jump to the next thicker band would be too much, simply add a second one of the lighter ones. It will give just that extra resistance you’re looking for without taking it over the top.

Shoulder presses are the best main exercises for your shoulders, but the main work is done by the front delt. There are specific exercises for the side and the rear delt which you shouldn’t miss out on when training shoulders. We have here a full shoulder workout with different exercises that will give you the strongest pump you can ever think of and keep you healthy for years to come – check it out here.